V2X communications are expected to bring in a series of far-reaching benefits for transformative changes to our society such as significantly improved roadway safety and efficiency, drastically reduced traffic jams and carbon monoxide emission, as well as optimized routes and unprecedented travel experiences. With 5G networks starting to roll out and the 6G research just begun, V2X, as one of the most promising vertical industries, has attracted tremendous investment worldwide and will be a game changer which opens the door to numerous opportunities for new services and businesses. A major objective of this workshop is to bring together state-of-the-art innovations, research activities (both in academia and industry), and the corresponding standardization impacts of V2X for the next generation intelligent transportation systems, so as to understand the inspirations, requirements, and the promising technical options to boost and enrich activities in the area of V2X. The scope of workshop includes (but not limited to) the following topics:

Title: From Connected vehicles to Internet-of-Things (IoT): Recent Advances in Communications and Networking

Abstract: Modern cars feature embedded systems that monitor and manage all the critical sensors and actuators. The in-vehicle connectivity can be further extended with Vehicle-to-Everything (V2X) technology, which allows cars to exchange that collected information and even act on it. Meanwhile, IoT will increase the pervasiveness of the Internet and the overall connectivity by integrating every “object” (e.g., sensors, smart phones, vehicles, infrastructures and external management platform) forming a fully connected system. By developing mission-critical and intelligent communications and networking capabilities, the combination of vehicles and IoT have the potential to reach a wide range of objectives at more cost effective ways.

Zhengguo Sheng has been a Senior lecturer in the Department of Engineering and Design at University of Sussex since 2018. He received his Ph.D. and M.S. with distinction at Imperial College London in 2011 and 2007, respectively, and his B.Sc. from the University of Electronic Science and Technology of China (UESTC) in 2006. From 2013 to 2014, he was a research associate in the Department of Electrical and Computer Engineering at University of British Columbia (UBC), Canada. From 2011 to 2013, he was with France Telecom Orange Labs as the senior researcher and project manager in M2M/IoT. During 2009, he also worked as a research intern with IBM T. J. Watson Research Center, USA, and U.S. Army Research Labs. His current research interests cover connected vehicles, Internet-of-Things (IoT), and cloud/edge computing. He has published over 100 journal and conference papers, 5 books, 1 patent and 2 standards contribution in OneM2M and OMA LWM2M. His current research works are funded by H2020, EPSRC, Royal Society and University of Sussex. He is also the receipt of Emerging research award 2017 from University of Sussex.

Abstract: Orthogonal time frequency space (OTFS) modulation is a recently proposed modulation scheme suited for high-mobility environments. It is a 2-dimensional modulation scheme designed in the delay-Doppler (DD) domain, unlike traditional modulation schemes which are designed in the time-frequency (TF) domain. OTFS multiplexes the information symbols in the DD domain, whereas conventional multicarrier modulation schemes multiplex symbols in the TF domain. Also, the channel response is viewed in the DD domain as opposed to viewing it in the TF domain. An advantage of the DD representation of wireless channels is that the rapid fluctuations in time-varying channels exhibit slow variations when viewed in the DD domain. This, along with the fact that the channel in the DD domain has a sparse nature, simplifies channel estimation in rapidly time-varying channels. Several studies in the literature have reported superior performance of OTFS compared to OFDM, generalized frequency division multiplexing (GFDM), and single-carrier FDMA (SC-FDMA) in high-mobility/high-Doppler environments, making OTFS attractive for use cases such as V2X, high-speed train, and mmWave communications. This talk will introduce OTFS and highlight some of the detection, channel estimation, PAPR, and multiple access aspects of OTFS. 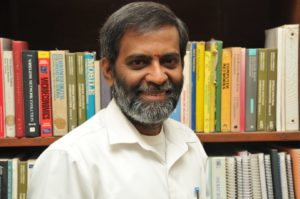 Dr. A. Chockalingam He received the B.E. (Hons.) degree in electronics and communication engineering from the P.S.G College of Technology, Coimbatore, India, in 1984, the M.Tech degree in electronics and electrical communication engineering (with specialization in satellite communications) from IIT Kharagpur, India, in 1985, and the Ph.D degree in electrical communication engineering (ECE) from the Indian Institute of Science (IISc), Bangalore, India, in 1993. From 1986 to 1993, he was with the Transmission Research and Development Division, Indian Telephone Industries Limited, Bangalore. From 1993 to 1996, he was a Post-Doctoral Fellow and an Assistant Project Scientist with the Department of Electrical and Computer Engineering, University of California at San Diego, CA, USA. From 1996 to 1998, he was with Qualcomm, Inc., San Diego, as a Staff Engineer/Manager with the Systems Engineering Group. Since 1998, he has been with the faculty of the Department of ECE, IISc, Bangalore, where he is currently a Professor, involved in wireless communications research. Dr. Chockalingam is a Fellow of the Indian National Academy of Engineering; the National Academy of Sciences, India; the Indian National Science Academy; and the Indian Academy of Sciences. He received the Swarnajayanti Fellowship and the J. C. Bose National Fellowship from the Department of Science and Technology, Government of India. He served as an Associate Editor for the IEEE Transactions on Vehicular Technology, an Editor for the IEEE Transactions on Wireless Communications, and a Guest Editor for the IEEE Journal on Selected Areas in Communications and the IEEE Journal of Selected Topics in Signal Processing (Special Issue on Soft Detection on Wireless Transmission). He is an author of the book on `Large MIMO Systems’ published by Cambridge University Press.